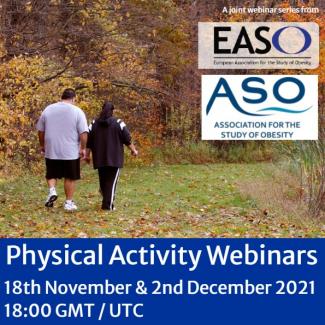 Exercise training can help support the management of overweight and obesity in adults and can contribute to health benefits beyond “scale victories”.

Further to the EASO Exercise Training Supplement published recently in Obesity Reviews, we are pleased to announce an upcoming webinar series held in collaboration with EASO on 18th November and 2 December 2021.

The webinar series will explore scientific evidence around the health benefits of exercise training for people living with overweight and obesity.

Learn more and read the EASO Supplement on Exercise Training.

Novo Nordisk has provided sponsorship to the Association for the Study of Obesity (ASO) to fully fund all costs for the development of this webinar, including creation, organisation, production and administration. Novo Nordisk has had no influence on the content and full editorial control remains the sole responsibility of ASO. None of the speakers have received a fee for their participation in this webinar, and ASO has been fully responsible for engaging with participants.

Dr Kristine Beaulieu is a lecturer and dietitian within the Appetite Control and Energy Balance Research Group in the School of Psychology at the University of Leeds. Her PhD investigated the influence of physical activity level on appetite control. In her postdocs, she examined the impact of weight loss through continuous or intermittent energy restriction on appetite control (DIVA project) and the impact of meal timing on appetite control and food reward. She recently completed a visiting fellowship at Steno Diabetes Center Copenhagen to gain new skills and knowledge in clinical diabetes prevention in the context of time-restricted eating in adults at risk of type 2 diabetes (RESET project). In addition to being a member of the EASO Physical Activity Working Group, she is involved in the EU Horizon 2020 SWEET project and the Satiety Map project.

Alice Bellicha is associate professor in Nutrition and Public Health at Sorbonne Paris Nord University in the Paris area. Her research activities over the last few years have focused on the role of physical activity in the management of patients living with obesity. She took an active part in the coordination of the EASO Physical Activity Working Group that synthetized the literature and proposed recommendations on exercise training in the management of overweight and obesity in adults. In 2020, she received the EASO New Investigator Award in Clinical Research. Since Sept 2021, she is a member of the Nutritional Epidemiology Research Team (EREN) and will contribute to the development of patient cohorts with the aim to better understand the role of nutritional factors (dietary intake and physical activity) in the secondary and tertiary prevention of chronic diseases.

She lives with an eating disorder called ARFID. Despite being physically active growing up, Type 2 Diabetes and other co-morbidities have been health barriers for her since her 30’s.

In 2015 Susie had a Roux-en-Y, with her diabetes in remission since. Coping with regain is a daily challenge.

She is Secretary of the European Coalition for People Living with Obesity (ECPO).

Susie shares her experiences to help address weight stigma and help to improve the lives of those who live with obesity.

JB’s initial research concerned the relationship among brain mechanisms, foods and appetite control, and led to the development of the Satiety Cascade. The strategic focus of research is the study of human appetite within an energy balance framework and has demonstrated that Energy Expenditure is a strong determinant of the Drive to Eat. Other research has included genetic studies on anorexia nervosa, and mechanisms of action of anti-obesity drugs. For over 30 years JB and colleagues have conducted a series of studies on the impact of physical activity on appetite which have revealed the dynamic interaction between energy expenditure and energy intake, and have illustrated the importance of physical activity for the control on obesity.  The Leeds research team has developed several instruments for the evaluation of human appetite in the laboratory and the real world.

JB was a member of the UK government DSI Foresight Expert Group that developed the concept of the Obesities Systems Map as the basis for the Change for Life Programme; he was also a member of the DoH Expert Group on Social Marketing approach to childhood obesity. JB has been an expert consultant for ILSI and EFSA, and has served on a number of Scientific Obesity Advisory Boards.

JB has received numerous prizes including the Johananoff International Fellowship, Sir David Cuthbertson Prize, Gino Bergami Prize, International Prize in Modern Nutrition, and the British Nutrition Foundation Prize. He has been visiting professor at the University of Ghent and Distinguished International Visiting Scholar at the University of Rhode Island. JB has been a long standing scientific governor of the BNF, was a founding member of the European Association for the Study of Obesity, and in 2019 he received a Lifetime Achievement Award from UK ASO.

Eliana V. Carraça is an Assistant Professor at Faculdade de Educação Física e Desporto, Universidade Lusófona de Humanidades e Tecnologias, Lisboa, Portugal. She is a clinical exercise physiologist, with a master in exercise and health, and received her Ph.D. in Health and Fitness in 2012. She has also received a Best Master Student award in 2009. Her research revolves around the field of motivational, self-regulatory and behavioural predictors of physical activity, eating behaviour and weight management. She is especially interested in the interplay and cross-behavioural regulation between physical activity and eating-self regulation, especially at the mechanistic level. She explores the mediating role of motivational dynamics (based on self-determination theory) and potential interactions with other psychological and non-psychological factors that might contribute to physical activity/exercise function as a gateway behaviour for healthy eating. Additionally, she has been involved in the design of health behaviour change interventions applying self-determination theory (in overweight/obese women and recreational runners). She has published 45 international peer-reviewed articles (h-index Scopus 14; h-index Google Scholar 20; 2606 citations), 10 national articles, was a co-author of 4 international and 2 national book chapters, and has received 6 awards and/or honours. She integrated the EASO (European Association for the Study of Obesity) Physical Activity Working Group, which drafted the first EASO recommendations for physical activity in adults with overweight or obesity, in collaboration with several leading researchers in the field of Obesity. She is currently the principal investigator of PAC-WOMAN (recently funded by FCT), a national project that will test a physical activity behaviour change intervention for post-menopausal breast cancer survivors on aromatase inhibitors. She was also the co-coordinator of KoR (Keep on Running) national project, a digital (brief) intervention study designed to increase sustained adherence to recreational running in a naturalistic environment. In the past, she has participated in the SPOTLIGHT project, funded by the European Commission (FP7), and in several FCT-funded projects (the PESO Study, the "Physical Activity and the Self-Regulation of Eating Behaviour and Body Weight" project, the Open-Access Repository of Self-Regulation Measures for Exercise, Eating, and Weight Control).

Jean-Michel Oppert, MD, PhD, is Professor of Nutrition at Sorbonne University, Paris, France. For his clinical work, he is head of the Department of Nutrition at Pitié-Salpêtrière university hospital (AP-HP) which is focused on advanced care of patients with severe obesity.

JM Oppert is past president (2009-12) of the European Association for the Study of Obesity (EASO). In 2019-21, he acted as coordinator of the EASO Physical Activity Working Group which produced a series of reviews, meta-analyses and recommendations on the topic of exercise training in the management of overweight and obesity.

Audrey Roberts is from Glasgow, Scotland. In 2015 she became the Scottish Patient Representative for the EASO Patient Council. Since then, was elected to the position of Vice-President of the European Coalition for People Living with Obesity (previously EASO Patient Council) on its inception in May 2019.
She has served as a committee member and trustee of the charity WLSinfo (now Obesity UK) for the past 18 years and I have organised the support group in Glasgow for pre-and post-op bariatric patients, since 2003.
More recently she represents Obesity UK within the Global Obesity Patient Alliance (GOPA)
She manages online discussion groups and one-to-one meetings with people who have or are considering bariatric surgery, who struggle with excess weight and issues related to obesity.